Discover all you need to know about Acireale

How much do you know about the town of Acireale? One of Sicily’s unsung, lesser-known stars, this is a town steeped in mythology, with an elegant baroque historic centre and some of Sicily’s most spectacular Carnival celebrations.

Set half-way between Catania and Taormina, just 40 minutes by car from Catania airport, the coastal town is perfectly located for exploring Sicily’s east coast. The vineyard-carpeted slopes of Mount Etna are on your doorstep and, heading south, Syracuse is just over an hour’s drive away,.

The legend of Acis and Galatea

Together with its neighbours on the banks of the river Acis – Aci Castello, Aci Trezza, Aci Catena, Aci San Antonio and Aci Bonaccorsi – the town’s name derives from the underground river which emerges as a spring at the seafront fishing village of Santa Maria La Scala.

The river is said to be named after Acis, a local shepherd who fell in love with the Nereid sea goddess, Galatea, triggering the rage of the giant Polyphemus. Unable to deal with his jealousy, he killed Acis by flinging a boulder at him, prompting the heartbroken Galatea to transform his blood into a river that ran from Mount Etna’s foothills to the sea below.

Things to see and do in Acireale

Top spot is the imposing baroque Piazza del Duomo. The Piazza is flanked by the town’s main cathedral, which dating back to the 15th century, boasts a fresco covered ceiling and columns, and works by Pietro Paolo Vasta and others.

Vasta was one of Acireale’s most important artists. More of his work can be seen in the baroque Chiesa di San Pietro e Paolo, also on the Piazza del Duomo, and in the nearby 18th century Basilica of San Sebastiano, a masterpiece in Sicilian baroque with a magnificent statue-studded balustrade. Other buildings of note include the town hall and the Palazzo Modò, built on the foundations of the former theatre Eldorado.

Enjoy spectacular views from the balcony at the Villa Belvedere, a panoramic park with statues of Acis and Galatea, and magnificent views of Mount Etna, the Timpa Nature Reserve and along the east coast of Sicily to Taormina.

Choose from a selection of local beaches.  Mulino beach is one of the prettiest, with a volcanic sea bed and dazzling blue water. On the downside, it’s slightly harder to reach than some of the area’s beaches, accessible only through the Timpa Nature Reserve, but this ensures that it generally remains quiet.  Santa Tecla is known for its unusual reefs and deep blue sea but, as with the beach at Torre Pozzillo, the sand tends to be quite gravelly.

At the charming fishing village of Santa Maria La Scala, the volcanic rock beach is scattered with large lava stones but the real attraction is the pretty port, the trail through the Timpa Nature Reserve and the promise of a wonderful insalata di mare overlooking the harbour.

The immediate area around Acireale tends to get overlooked by tourists who head straight for Taormina, so you can be sure of getting an authentic experience. Some of the nearby villages are lovely to visit for an evening stroll or dinner out. At Aci Trezza, join the locals on the seafront promenade before dining in one of the seafood restaurants around the harbour.

A chartered boat trip is one of the most relaxing ways of exploring. Sail past the dramatic Faraglioni di Aci Trezza sea stacks and along the coast, all the way to the picture postcard town of Taormina.

When you want to explore a little further afield, the extraordinary city of Syracuse is around 90km from Acireale. Driving there takes just over an hour or travel stress free by hopping on a train.

If you can time your stay in Acireale to coincide with Sicily’s most famous carnival, you’re in for a treat! Traditionally taking place in February during the lead-up to Lent, the historic centre of Acireale provides a wonderful backdrop to the flower-scented processions, parades of allegorical floats and generally partying. Reputedly first established in 1594, the event now enjoys the reputation of being Italy’s most beautiful carnival. 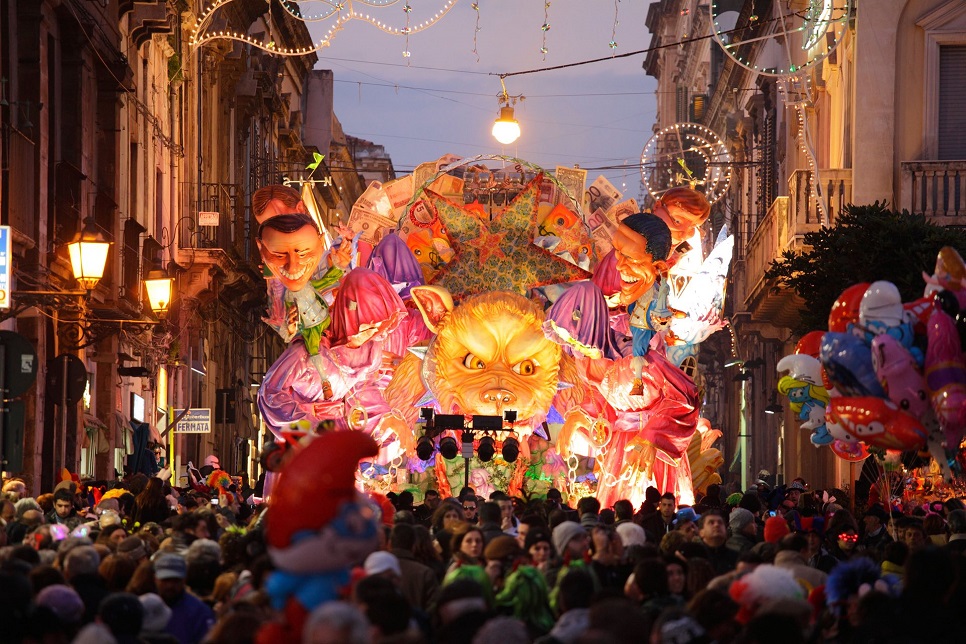 Choose from a selection of properties in and around Acireale, ranging from a modest 2-bedroom apartment in the tiny fishing port of Pozzillo to a sophisticated contemporary villa for 13 on the outskirts of Acireale. For those who want to explore the area while holidaying with friends, Le Case dell’Etna is a collection of 3 independent cottages, 2 with their own pool.