The Sicily symbol and emblem of its flag is unique and mystifying. The head surrounded by three legs can be seen everywhere on the enchanting island, from beautiful ceramics to little souvenir trinkets. It is the certified logo of Sicily and has a rich mythical story behind how it came to be. 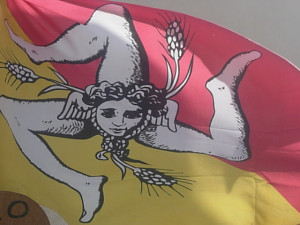 The Meaning of the Symbol

The symbol of Sicily known as the Trinacria or Triseklion is said to be derived from a myth about three nymphs. They are said to have danced all around the world gathering the best fruit, stones and soil, they then threw all of it into the sea and created Sicily. This is why, they say, the island has three corners which symbolise each feet of the nymphs.

The Trinacria has been the symbol of Sicily since the days of the Magna Graecia expansion into the Mediterranean. Yet, another myth comes from the time of King Frederick the II. It is about a boy who could swim underwater for long periods of time and was put to the test by the king. Eventually, the story goes, the boy discovered that Sicily was held up by three columns and one was about to break. The boy, Colapesce, then decided to hold the broken column on his own. Every time there is an earthquake, it is attributed to the boy being so tired from holding up the island.

The meaning of the Sicily symbol is mainly mythological but some historians have dated it back to being an old religious symbol. The Triseklion is also the symbol of the Isle of Man and many other coats of arms. The flag officially became the symbol of Sicily in 1282 after a successful revolt by the Sicilians against Charles the I. The Sicilian version is the head of Medusa surrounded by three bent legs.