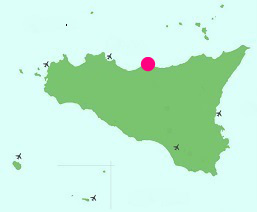 Founded in 648 BC, the ancient town of Himera is on the top of a hill south of the main Messina-Palermo road on Sicily’s north coast. It was here that, in 480 BC, the allied forces of Agrigento and Syracuse defeated the Carthaginians who later (409 BC) re-invaded and razed the town to the ground.

The best preserved of the buildings is the Tempio della Vittoria which dates back to the fifth century BC and is thought to have been built by the Carthaginians, under pressure from the Greeks, to celebrate the Greek victory in 480 BC. Remains of the columns from the Doric style temple are still clearly visible and other objects from the site are on display in a museum. The lion head-sculpted eaves are in the Archaeological Museum of Palermo.