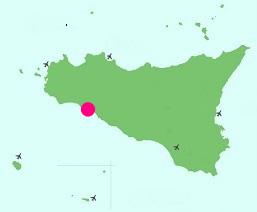 Overlooking Capo Bianco, one of the most popular beaches on Sicily’s south coast, the archaeological site of Eraclea Minoa is perched on a hill that looks out over pine woods to the sea.

The site’s original name was most likely Minoa, named after Minos, ruler of Crete, with the name Eraclea probably added by Greek colonisers who founded the city in the sixth century BC. Located on the border between the areas dominated by the Greeks and the Carthaginians, the city was passed backwards and forwards until 210 BC when it was conquered by the Romans. The city was then abandoned in the first century BC, possibly due to a landslide that dragged the southern part of the town and the walls into the sea.

Excavations started on the site in 1950 at the discovery of a theatre and dwellings made from rough bricks which were found to have mosaic fragments. The archaeological area can still be visited, together with a small museum exhibiting materials that were excavated from the site and surrounding area.

View all our villas and holiday homes near Eraclea Minoa>>